'Resurrection' - Chapters One and Two

*Please be aware that this excerpt contains a fairly graphic sex scene.* 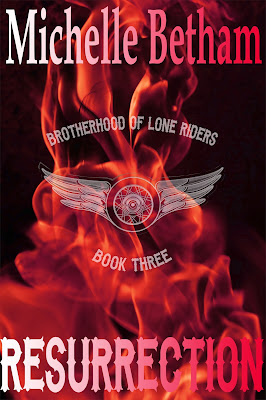 Somewhere in the distance a train thundered by. Not enough to disturb the peace, but it had woken him anyway, pulled him back from the same dream he’d been having for weeks now.
Hauling himself up onto his elbows he took a couple of seconds to let his eyes adjust to the dim and dingy light. The smell in there wasn’t getting any better, either – a mixture of damp and something he couldn’t describe. Something he wasn’t sure he wanted to know much more about, save that it assaulted his nostrils every time he took a breath.
Reaching out he picked up his watch. He’d slept most of the day, but that wasn’t unusual. That’s what came to living in the dark – no sense of time. Limited daylight.
He looked over to the side again. A foil-wrapped parcel and a fresh bottle of water lay next to his discarded jacket. Another food drop must have happened while he’d been asleep, and for that he was grateful. Most of the time he was starving, but what little food he received on a regular basis, it was enough to keep him going.
Twisting the cap off the water he took a long drink, savouring every mouthful, thankful it was cold. The drop must’ve only happened recently.
Drawing his knees up to his chest he leaned forward, resting his forehead on his arms, closing his eyes and breathing in deep, then regretting it, because that smell made him feel sick at times. He had to get out of here, but striking too early would be a bad move. He knew that. He had to wait, until the time was right. And they’d let him know when that was. They stood to gain from this just as much as he did, and once it was over deals would be done, debts would be paid, and he’d be able to move on. Until then, all he could do was sit tight, and wait…

Hector Almeda never had been a patient man. That’s why his wife had left him after just six years of marriage. Why his daughter had taken every opportunity to rebel against him in the most extreme of ways. Why his friends both feared and respected him, in equal measure. Why his youngest son had fought him from the second he could talk.
‘You still think this is a good idea?’
Hector looked up, his eyes meeting the cold, steely gaze of his eldest son’s. ‘It needs to be finished, Sol. Once and for all.’
‘I thought we’d agreed to move on. I thought we’d put all this behind us.’
‘Have you forgotten what happened?’
Sol’s dark eyes held his father’s stare. ‘I’ll never forget what happened. But he paid the price.’
Hector looked away, turning around and walking out of the clubhouse. ‘It wasn’t enough.’
Sol followed Hector outside, grabbing the older man’s arm, swinging him around to face him. He’d never been afraid of his father. He’d never once let himself be intimidated by the self-imposed importance Hector Almeda had placed on himself. ‘If I can let it go, why can’t you, huh?’
‘It wasn’t enough, Sol. We don’t leave things like this; it’s not how it works.’
‘If I can say I’m done with it, if I can do that, then you should be able to do what you’ve done for the past five years and leave it alone. I don’t want any part of it. Not now. Digging all of that up again? You really want to go there?’
Hector stared down at his son’s hand gripping his upper arm. ‘You have no choice. We as a club have no choice. Things have escalated, Sol, and we can’t ignore that. We gave him a chance, when he came back here – we gave him a chance, but now… he’s changed the game and we didn’t do that, that was all on him. He became one of them, and that we can’t ignore. So you – you have no choice.’
Sol pulled his hand away, almost throwing his father’s arm down. ‘I’ve always had a choice.’
Once more Hector’s eyes met Sol’s, holding his gaze. ‘You really believe that?’
Sol let out a low, almost sinister chuckle, sliding his hands into his pockets, stepping back from Hector. ‘I’ve always had a choice.’
Hector watched his son walk away; watched him climb onto his bike and speed off out of the compound.
Sol had no choice. None of them did. Not anymore.

'Resurrection' is available to download HERE from Amazon. And it's FREE to read with Kindle Unlimited!