Excerpt from 'See You At The Show' 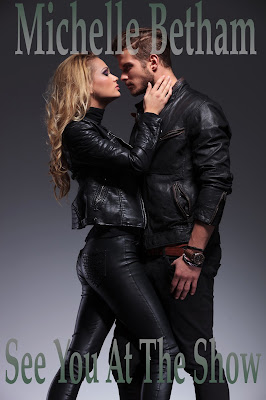 “Is that out of your system now, then?” Johnny asked as Stevie threw herself down opposite him.  She ignored him.  “What Mark Cassidy wants, Mark Cassidy gets, huh?”
She looked at him.  He was staring out of the bus window as it sped along the motorway, his mood resembling something close to petulant.  Or maybe he really was just tired, after all, wasn’t everybody?
“That’s not the way it works, Johnny, and you know that.”
He turned to look at her.  “Have you ever been in love, Stevie?”
“Where the hell did that come from?”
He’d never once asked her anything like that before.  It was a subject neither of them had ever felt the need to talk about and God knows why he was bringing it up now.
“Have you?”
Johnny watched her reaction closely.  Something had changed in her eyes when he’d asked that question, but whether it had anything to do with Mark he couldn’t quite work out.
“No.  No, I haven’t been in love.”  A lie.  ”Can we change the subject now?”
She leaned over to grab a cigarette from the box lying on the table in front of a now sleeping Jack.
“Not even with Mark?”
She lit the cigarette, leaning back in her seat, forgetting that Ava was still in the vicinity.  She suddenly just really needed one.
“I’m not in love with Mark.  I’ve never been in love with Mark.”  She looked at him, pushing a hand through her hair and away from her face.  “Is this going anywhere, Johnny?”
He shook his head.  “Maybe I just don’t understand you two as much as I thought I did.”
“What the...Johnny?  Where are you going?”
“To grab some sleep before we get there.  I’m shattered.”
Stevie watched him make his way to the bunks, throwing Mark a strange look as he arrived back out front.
“What’s up with him?” Mark asked, slipping into the seat next to Stevie.
“Beats me.”  She smiled at him as he leaned in for a quick, hard kiss.  “You feeling a bit calmer now?”
“When am I ever anything else?” he grinned, pulling her against him and going in for another kiss.  “But
yeah, I’m feeling a lot calmer.  However, if you’re offering to make me feel just that little bit more relaxed...”
She laughed, laying her legs over his as he ran his fingers up and down them, creeping up the bottom of her denim shorts as their mouths met again in a slower, deeper kiss.
“You know what,” she said, gently stroking the back of his neck as they continued to kiss.  “I reckon we could both do with getting our heads down for a bit.”
“A bit of what, though?” Jack smirked, waking up and stretching out.
“Sleep, Jack.  Unlike you lot, when we get to the stadium me and the guys have got shitloads to do.  You just bugger off to your hotel, smoke joints and demand crates of lager while we’re working our arses off setting everything up.  You might be getting the day off today but the rest of us have got to start sorting things out for tomorrow.”
“Is that what we do?” Jack said, winking at her.  “Smoke joints and drink lager?”
“Pretty much, yeah,” Mark laughed.
“Jesus, why do I bother?” Stevie sighed, swinging her legs off of Mark's and straightening her t-shirt.
“Hang on.  Weren’t we going for a lie down?” Mark asked, grabbing Jack’s cigarettes before he put them back in his pocket, taking out two, putting one behind his ear.
“I’m not in the mood anymore.”
“I thought you were always in the mood?” Jack said, standing up and leaning back against the side of the
table.
“Can you tell him to piss off, Mark?  He’s really starting to wind me up today.”
Jack whistled, leaning forward to ruffle Stevie’s hair.  She slapped his hands away, kneeling up on her seat to get a better aim at him.
“Ok, kids, can we just try and play nicely now.”  Dave Deacon emerged from the back of the bus, throwing the video camera at Mark.  “And I think this belongs to you, or I’m assuming it does seeing as you appear to be starring in whatever’s on there.”  He looked at Stevie as he walked past, but she ignored him.  He was really starting to annoy her, too.  “And make sure that doesn’t get into the wrong hands.  The last thing we fucking need is a sex tape scandal in the middle of a tour.”
“Oh, yeah!” Jack grinned, snatching the camera from Mark.  “New footage!”
“Hey, hang on, give that here, Jack!”
“Mark, it’s ok.  It’s nothing he hasn’t seen before.  If it keeps his tiny mind occupied for half an hour it’ll be worth it.”  She pushed Mark up out of his seat, taking his hand.  “Come on.  Let’s go get that lie down.  I need to get out of here.”  She looked back at Jack, throwing him a sarcastic smile.  “Oh, and enjoy the show, Warner.  But you watch that right hand of yours.  I know you get off on watching me fuck but don’t work it too hard, ok?  You’re gonna need it tomorrow.”
“Funny girl.”
She gave him the finger.
“Yeah, ladylike, Stevie.  Very ladylike.”
“There’s nothing ladylike about me, Jack.  And your front man’s about to find out just how unladylike I can
really be.”

'See You At The Show' is available to download HERE.
Read for FREE with Kindle Unlimited.