'Bound' - Soldiers of Darkness #3 - Chapter One

*Please be aware that this excerpt contains some strong language* 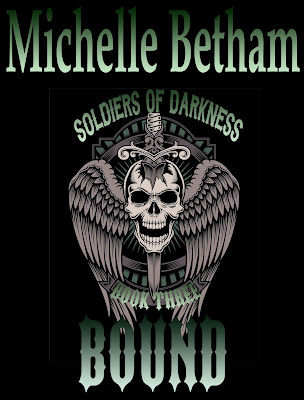 “You got hold of a cell phone now?”
“Managed to do a deal with one of the guys.”
“And what’s that cost you, huh?”
“It was worth it, OK? Makes this shit so much easier.”
“Any news?”
“Nothing concrete yet. Still waiting on a date. They’re just dragging their feet, that’s all. And it’s not like I can file a complaint or anything. I gotta dance to their tune.”
I sit down on the steps of the clubhouse and look out over the compound. It’s unusually quiet, not many people about, but something’s going on over at Six tonight so that’s where most of the guys’ll be, getting their rocks off drinking whiskey and watching naked girls play with each other. Whether I join them when I’m done here, I don’t know. Not sure if I’m in the mood right now.
“I’m gonna fix this, Dom.” I switch my cell to my other ear and drop my gaze. “I promise.”
“Hey. What’ve you gotta fix, Theo? This was my decision, it’s all on me…”
“It was my fault, Dom. It was all my fault.” I take a long, deep breath and drop my head into my hands because the guilt, that’s never gonna go away, it’s never gonna leave me. That’s why I’ve got to do this; why I’ve got to help my brother. “Dom…”
“You don’t have to go through with this, Theo. You know that, don’t you? You’re risking so fucking much…”
“What am I risking, exactly? What do I have anymore? I lost it all. I lost everything…”
“Leave it, kiddo. Don’t go there, OK?”
I sigh quietly and rake a hand back and forth through my hair. “We’re working on it. This end. Mack he – he’s been good to me, he’s making sure this all runs as smoothly as it can. And we’re working with another club for back-up, one the Soldiers have worked with for a good few years now, so Mack tells me. The Black Dogs. You heard of them?”
“I know who they are. Cole Rockwell still in charge of that chapter?”
“Yeah. He is.”
“You don’t sound like you’ve warmed to the guy. But he has connections, Theo. Good ones. He’ll be useful.”
“I just want you to know we’re ready, Dom. We’re just waiting on you to let us know when it’s happening.”
“Hey, I know you’re ready. I trust you, all right? And I told you Mack would come through. He owes me, remember? I’m just glad he’s turned out to be a man of his word. I was afraid now he’s gone got himself married with kids he’d turn soft, tell me he ain’t doing that kinda shit no more.”
“Just keep me updated, OK? As soon as you hear anything, call me.”
“You take care now, Theo, y’hear me?”
I end the call and throw back my head, looking up at the stars as they twinkle and flash like tiny lights in the sky. Warning lights? Like I’d take any notice anyway. It’s a bit too late for that.
I’m a good guy. Or at least, I used to be. I used to be a lot of things. But now – now all I have to do is listen, and keep my head down, just like Mack told me to do. I haven’t been here, in this Soldiers of Darkness chapter, in any chapter for all that long. And if I wasn’t desperate for the kind of help I need right now I wouldn’t be here at all. But Mack Slayer, he’s giving me that help. He’s offered that help. One quick meeting in a bar, a quiet chat, and all of a sudden things were happening. Because Dom’s right, Mack owes him. My brother took the fall for Mack Slayer a long time ago; did time, for Mack Slayer. And Mack told Dom he’d repay him, one day. That day’s here now. And he’s kept his word.
I’m a good guy. Really, I am. And I don’t belong here, but I am here; part of the Soldiers of Darkness. But I’m here for a reason. And I don’t intend to stick around for too long, either. Once I’m done; once this job is finished I’ll be leaving. I’ll have to. I’ll have no other choice but to get out of here. No other choice…

“How old is she?” I already know the answers to these questions I'm asking, I just want to make sure everyone else involved is up to speed. And as I wait for the reply I keep my gaze fixed on the blonde haired woman sitting at the table in the room on the other side of the two-way mirror.
“Thirty-two.”
“Looks younger.” I turn my head slightly and glance over at the sallow-faced agent leaning back against the wall, puffing away on an e-cigarette. “Lived within the biker community all her life, huh?”
“Born and brought up.”
“You’d think she’d be a lot smarter than this then, wouldn’t you?” I turn back to face the woman, whose head’s now bowed, her long blonde hair obscuring her face as she absent-mindedly scrapes her fingernails across the tabletop. “Getting caught and all. You’d have thought she’d know how to avoid that happening.”
“She was set up. Framed.”
“So you say.” I drag a hand through my hair. “Still did the crime, though, didn’t she?”
“And we were all ready to charge her pretty ass, until you turned up.”
“Yeah, well, that pretty ass may still be facing a not-so-pretty prison sentence if she isn’t suitable. But if she is…” I narrow my eyes as I watch the woman slowly raise her head and look straight into the mirror, “then she’s coming back to New Mexico, with me.” She drops her gaze again and I turn around so my back’s to the mirror. “I’ll go talk to her. Get this thing moving.”
The agent just nods and takes another draw on his electronic cigarette. “Knock yourself out.”
I’ve waited a long time for a break like this. For someone, like this, to come along and give me that chance I need to bring the Soldiers of Darkness down. To bring Cole Rockwell and the Black Dogs down. I’ve been watching those two clubs, it’s been my job for the past couple of years, to watch those clubs. And I know this front they put up, this community presence they push forward, I know that’s bullshit; nothing but a smokescreen. I know those clubs and the men who run them, they’re bad news, they’re dangerous. Ever since the Soldiers of Darkness arrived in New Mexico I’ve been assigned to keep a very close eye on them. Mack Slayer is the son of Sam Wheeler, a dangerous criminal, a murderer who may have done his time but he’s still considered a man we’re not comfortable having out there on the streets. And Mack Slayer may be back as President of the Soldiers now, but it’s Sam pulling the strings, working with Cole Rockwell to pull off something more than just a weapons drop or a drugs haul. Something’s going on, and I need to know what that is, exactly, because at the minute all we have are rumors and hearsay, we've got nothing concrete. But whatever it is, I need to prove it’s happening. I need to know when it’s happening. And I need to catch these men in the process of carrying out whatever the hell it is they're planning. And as long as this woman listens to me; as long as she’s willing to take a risk, this could be the breakthrough we’ve been looking for. I just need her on side first. And I think that’s actually gonna be an easy call, because she really only has two choices here – take the deal I’m about to offer her, or she’s going to jail. Set up or no set up, it’s her ass on the line.
I need her.
She needs me more.
End of fucking story.

I look up as the door opens and a tall, stony-faced man walks in, hands in his pockets, his stance sending out a definite ‘I’m taking no shit’ message. He's dressed a bit more casually than the other assorted cops and agents I've seen since I was brought here, and by that I mean his tie's slightly looser around his neck and his jacket's a little creased, and he's wearing jeans, not a full suit.

“Wow. Those options, huh?” I drop my gaze and close my eyes, and I take a long, deep breath before I look back up, but his eyes are still fixed on me. “I’m not just an informant, really, then. Am I?”
“No. The minute you agree to enter the WITSEC program you become a Federal Witness.”
“You really want these guys, don’t you?”
“Yes. We do. And we could just put an agent in undercover, get one of our own to do this job. We could do that. But putting someone like you in there instead…”
“Someone like me?”
His eyes stay fixed on mine. His expression doesn’t waver, he’s practically emotionless. “Someone who knows how their world works, Skye.”
“My father’s club wasn’t like theirs, Agent Franks. We weren’t one percenters.”
“Your father wasn’t a saint, either.”
I laugh, I can’t help it. “Yeah. You really have done your research, huh?”
“We need you, Skye.” He leans forward and steeples his fingers on the tabletop, his eyes still boring deep into mine. “And I’m not sure you’ve got much of a choice here, to be honest. You either help us bring these people down, or you go down.”
I hold his gaze and stop myself from swallowing hard, that could make me appear nervous, and I don’t want this man to see any sign of weakness in me. “I’ll be putting myself in real danger. I mean, I’ll be nothing but a club girl, and a new one at that…”
“We won’t let anything happen to you, I promise you that. And I think you can handle this. I think you can do this. Because, if you don’t think you can…?”
He’s right.
I’ve got no fucking choice at all.

'Bound ' is available to download now!
Read for FREE with Kindle Unlimited.