Excerpt from 'Illusions of Love' 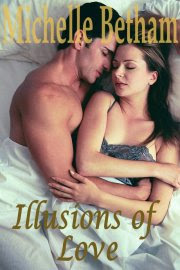 Dominic MacDonald was thirty-six-years-old, six-foot-one inches tall and about as handsome as you could get without it being illegal.  He had messed-up, almost scruffy-looking dark brown hair but on him it looked less rock star and more stylish, framing a face that carried the most incredible blue eyes and a smile that could only be described as devastating.  Yet, despite all of this, he wasn’t somebody who knew he was good looking and wanted the world to know that, although, he could turn it on when he needed to.  When the situation called for it.  But, when he wasn’t playing Mr Movie Star he was a modest, almost understated young man.  He was naturally charming, very polite, and someone who just happened to be one of the most incredible looking men in the world of movies right now.

With a flair for romantic comedies he was an actor who was very much in demand.  He was a lot of peoples’ first choice for leading man and he played the part like nobody else could, with his natural charm and modesty translating perfectly onto the big screen.  Originally from Manhattan, he’d moved to L.A. in his mid-twenties, when the movie offers had started flooding in, and over the years he’d had a steady and successful career, working with some of the biggest names in Hollywood with varying degrees of success.  Because his one downfall was the fact he couldn’t stay away from relationships with his leading ladies.  He had a reputation for falling in love with his pretty co-stars then leaving them the second a new movie offer appeared with a new conquest on the horizon, but even he was getting tired of that now.  He wasn’t twenty-five anymore.  He was getting older.

But, despite that, settling down wasn’t high on his agenda just yet.  No, he had quite a few things to sort out before he even began to think about that, because the past year or so had thrown up a few surprises in Dominic’s life.  He was still getting his head around everything his mother had told him just before she’d died, only a few months ago.  Things she’d waited until her final breath to tell him.  Things he’d had no idea about, until now.  Things that had messed up his head for a while but he was in control now, it was all in hand.  He was coping with the news, and in some ways it made a lot of things in his life make a lot more sense but, well; he’d get there.  He knew what he was doing.

Walking over to the bathroom mirror he stared at his tired reflection.  Maybe he shouldn’t have stayed up half the night playing poker, not when he should be preparing for this new movie he was due to start shooting any day now.

He looked back out into the bedroom, at the pretty young woman lying naked in his bed, still asleep and not anywhere near as appealing as she had been last night when he’d been blinded by too much Jack Daniels and a box of Cuban cigars.  He really had to cut back on nights like that, so maybe heading to Las Vegas – the setting for his new movie – wasn’t the ideal place for him to be going.  But, then again, it was also the place he needed to be.  He was looking forward to it.  For a number of reasons.  Who wouldn’t say no to a couple of months in Vegas?  Especially when you were going to be working alongside the one actress he’d waited years to make a movie with.  The one actress he’d always wanted to meet but, so far, had never managed to get anywhere near.  Now, however, he had a reason for wanting to get close to her.

Dominic smiled at his reflection, running his fingers over his rough chin.  Yeah, he was looking forward to Vegas.  He had no idea what was going to happen once he got there, he hadn’t planned that far ahead yet, but one thing he knew for sure was that he was going to enjoy it.  He was going to enjoy every single second.

'Illusions of Love' is available to download HERE.
Or read for FREE with Kindle Unlimited!