I'm really excited today to have the wonderful Sue Fortin here on my blog to talk about her latest release The Dead Wife, which is released on July 12th...

Police have ruled out suspicious circumstances in the investigation into the death of Elizabeth Sinclair, wife of charismatic entrepreneur Harry Sinclair, found drowned in the lake of the family's holiday park.

It's been two years since the Sinclair case closed but when reporter Steph Durham receives a tip off that could give her the scoop of the year, she's drawn deeper and deeper into the secretive Sinclair family.

Elizabeth's death wasn't a tragic accident. And the truth will come at a deadly price... 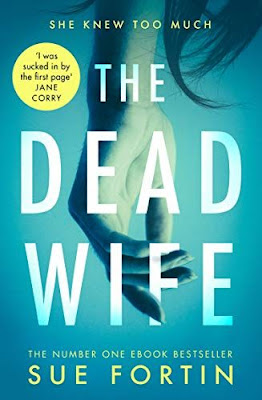 And now I'll let Sue tell you a little bit more about the book, and some of the ideas behind it...

Writers often get asked where they get their ideas from and I think the most common answer would be from the world around us, from snippets of overheard conversations, from news reports, from social media, from books, from films, from tv – it can just be the tiniest of comments that can spark the imagination of a writer.

I’ve found that with pretty much all of my books, although the plots and the ideas are different, there has been an overriding theme – family dynamics. It really fascinates me and being one of four children, who has four children and two grandchildren, it’s probably not that surprising. Although these relationships are all very different and have their own rhythm and history and sense of place in my life, they are all important to me and I think that’s what underlines my writing.

Families can evoke such strong emotions and can bring out the best and the worst in us. It’s amazing how we can sometimes really not like what a member of the family has said or done, but underneath it all, we still love them. Families can provide the safety net which allows us to say or do things we wouldn’t necessarily do ‘in public’ and, equally, they can provide the source for us to do things which might be considered out of character.

My latest book The Dead Wife looks at a number of issues within two family units – The Sinclair family made up of a mother and her three adult sons, Dominic, Harry and Owen and the Durham/Lynch family – a mother and daughter who have a rather strained relationship with each other. On the surface the Sinclair family look to have it all. They run a successful upmarket holiday centre in the Lake District and are all really supportive or each other, but scratch just a little below the surface and there are plenty of secrets and power struggles going on, together with a recent tragedy when Harry’s wife drowned in the lake on the resort. The Durham/Lynch relationship between a mother and daughter comes under even more strain as the journalist daughter sets out to investigate the death of the Sinclair wife, only to find people closer to home are more involved than she ever imagined.

I especially enjoyed writing about the relationship between the three brothers, how the dynamics there worked, the pecking order, the interaction between them and how events going way back into their childhood shaped the men they are today.

The Dead Wife is a mystery/thriller and has a strong romantic theme for those who enjoy reading romantic suspense.

Thanks so much for having me on your blog!


The Dead Wife is released on July 12th, but it's available to pre-order right now!


Thank you so much for stopping by, Sue, and wishing you lots of luck with The Dead Wife!