'No Matter What' - My first novel, and a true labour of love.

"Write about what you know".  How many times, as a new writer, have you heard that?  Personally, I don't think you need to take it quite so literally.  Why?  Well, as writers, aren't we supposed to have vivid imaginations and the ability to embelish?  Aren't we supposed to be able to take a subject or a situation and turn it into anything we want it to be?
You see, I think it's not so much write about what you know, more about what you feel comfortable writing about.  And I think it was my own battle with this one piece of advice (write about what you know) that delayed me writing my first book for so long.  Because I always knew that the first book I was going to write was going to be 'No Matter What'.  But, because it was a story that involved a place I'd never been to and a situation I'd never been in I always thought, am I going to be able to carry this off?  And, more importantly, are people going to believe in my story and my characters?  And if that wasn't enough, you find yourself surrounded by people saying you should look at what's in vogue right now and write about what people seem to want to read, but I can't do that.  We may be in the midst of a young-adult-based-vampire-stories phase (or whatever they are, I don't have kids, I know nothing about this and do not, in any way, find Robert Pattinson attractive) but I couldn't write one of them to save my life!  I know I've probably contradicted everything I just wrote before by saying that - I did say we, as writers, should be able to turn any situation into what we want it to be - but I was probably generalising just a little too much.  What I should probably have said was, if you have a subject you're passionate about and you feel a pull towards that subject as a theme for your book, then take that subject and work with it to your advantage.  Make it what you want it to be.  But I think to write about something, just because it's popular, even though you have no interest in it whatsoever - that could be a mistake.  If I'm not feeling something I can't write about it, which is why I ignored everything that was seemingly being thrown at me, sat down, and wrote the book I wanted to write.
'No Matter What' - or the basic premise for it anyway - was conceived way back in the very early 90's.  I've always had a very vivid imagination, I've been writing stories all my life and have often been accused of sometimes living with my head in the clouds.  But that's just me, I'm always thinking, always planning, and almost 20 years ago the first seeds of my first book were sown.  I had the characters (or most of them anyway) already there in my head and the story never left me.  It was always there as the years went on, growing, evolving, waiting to appear.  Because I always knew that, one day, I would write it all down and turn it into that book it was always going to be.  Writing that novel was almost a defining moment for me.  To get that story - a story I've carried around with me for almost 20 years - down on paper and see it as a finished book was such a great sense of achievement for me.  But still people were saying that something like that would never sell because it was a book based in Hollywood written by a woman who lives in the North East of England.  Ok, so I've never been to L.A., I've never been an actress or dated a Hollywood superstar, I've never done anything like that - and I never will (although, if Keanu Reeves ever offered...) but does that mean to say that I can't write about it?  And make those characters and the situations I put them in believable?  Yes, I can.  Because, although the story is set in Hollywood and the characters are mostly all rich and famous and glamourous, they are just people in situations that all of us go through at some point in our lives - they feel sadness, loss, happiness.  They fall in love and have their hearts broken, they have family secrets - their lives are just as complicated as anyone elses.  The fact I've made them rich and glamourous is because I write books for escapism, I want people to lose themselves in another world for a couple of hours.  I don't do gritty realism, I can't write that stuff.  I'm not saying I don't like it, I just can't write it.
My absolute heroine, as far as the literary world is concerned, is Jackie Collins.  She has the ability, in my opinion, to completely draw you into another world, a place where you can lose yourself and be completely involved in the story and for years - decades - I have read her books and admired her writing.  She has inspired me more than anyone else to follow my dream. 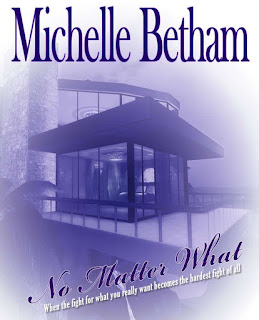 And whilst 'No Matter What' is not a Jackie Collins carbon copy - I wouldn't be so stupid as to think I could pull that off - it is certainly a Jackie Collins-inspired book.  I've taken that word escapism and created a world that I want people to become involved in, to get lost in.  I want people to care about these characters I've created and feel what they're feeling.  I want to take people away from their everyday lives and be somewhere else for a little while.

It took 20 years for this book to see the light of day and I'm very, very proud of it.  It may not be the "in" thing at the minute, but surely romance and escapism are always going to be popular to some people?  Surely a good story and strong characters are always going to be a pull to some readers?  There are no vampires or ghosts or paranormal activity of any kind - it's a contemporary love story, a two-decade-spanning saga that takes us on a journey with these characters, it lets us into their lives and follows them through every emotion and feeling they go through.  It's a story I wrote to be read and enjoyed, that's all.  A story I loved writing.  I just hope and pray that more people get to hear about this book and give it a chance, because that's why I write - to give people enjoyment.  To give people a story worth reading.
So, if you like your romance with a bit of a kick, you want a story you can get lost in and a good long read, then check out my debut eBook.  Perfect for a holiday read or before-bed browse; something to get lost in on the journey to work.  It's the kind of thing I love to read, which is why it's also the kind of thing I love to write.  If you're interested in taking a look and finding out more about the story then you'll find details here:-
http://www.amazon.co.uk/dp/B00537TKN8/ref=cm_sw_r_tw_dp_vk24nb01A3GGE

Ofcourse, here's another question - as a writer, should we stick to just one genre?  Do we de-value ourselves by writing different styles of books?  Or does showing we're versatile open more doors and gain us more readers?  Well, that's a question for tomorrow I think...