Want to know more about author Sharon Booth? She's here on my blog today to take part in 'Meet The Author', so, read on to find out what inspires Sharon, who her ideal dinner guests would be, and what she's currently binge-watching. And also find out more about her brand new book release New Doctor at Chestnut House... 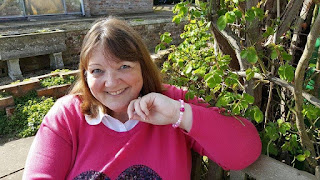 What genre do you write in? And what inspired you to write in that particular genre?

I write contemporary romance—usually with lots of humour thrown in. I call it contemporary romance; others may call it romantic comedy, women's fiction, or even chick lit. I don't mind what label people give it—although I do wonder why women need their own fiction. You don't hear about men's fiction, do you? Anyway, back when I merely dabbled in writing, creating "Chapter One" a multitude of times, but never reaching "Chapter Two", I tried to write sagas of the Catherine Cookson variety. Throughout my twenties and thirties, it was her books I read more than any other. Then I discovered Sue Townsend and Jilly Cooper, and realised I really, really enjoyed a laugh! I'd never read chick lit or romcoms before, but then I watched an excellent documentary series called Reader, I Married Him, which was all about writing romance novels. It really caught my imagination and I went on Amazon and searched for chick lit—not really knowing how else to describe it. I think the first book I bought in that genre was The Birds and the Bees by Milly Johnson. I was hooked. I quickly discovered Carole Matthews, Veronica Henry, Trisha Ashley, and so many others. I knew that this was the sort of book I wanted to write. Romantic but funny, with heroines who could be my best friend, and heroes I fell totally in love with. That's what I've stuck with ever since, although I've recently written a couple of pocket novels for The People's Friend, which are sweeter, gentler romances, and they are now published as part of the Fabrian Books' Feel-Good series.

What was the inspiration for your current book?

My day job is working in a medical centre. It's a busy GP practice, with around fifteen thousand patients, and the work is non-stop. It can be very stressful, but there are some really funny moments. The things I could tell you—but, of course, I can't! I started to think about building a series around a different sort of GP practice—a small, rural surgery set in a village on the beautiful Yorkshire Moors. I'd already created a surgery in my Kearton Bay series, and mentioned another, larger one—the Castle Street Practice—in Kearton Bay's market town neighbour, Helmston. I thought, what if this new surgery was the branch surgery for Castle Street? I'd mentioned a village called Bramblewick, in A Kiss from a Rose, so I decided to place the surgery there. The story was one I'd initially planned to use as a Kearton Bay story, but it hadn't really worked so had been sitting on my laptop for ages. I reworked it and sent it off to The People's Friend, who published it as a pocket novel. Then I made a few tweaks until it was suitable as a Fabrian Books' Feel-Good Novel. Before I knew it, I had a whole host of characters and realised it would make a good series. I'm really hoping I have time to write a Bramblewick Christmas story this year, too.

Do you get nervous reading reviews of your books?

Absolutely terrified! When I see I have a new review, my stomach starts churning and I feel really nauseous. That never goes away, and probably never will—although I know that a review, good or bad, is just one person's opinion, and I have to toughen up about them. It's funny, but it's always the negative comment you remember, even if the positive ones far outnumber it. I know that's not just me, though. Writers are a sensitive bunch!

Paperback or ebooks—do you have a preference?

I absolutely love paperbacks. The touch of them, the smell of them, and the look of them. Some of them are so pretty and sparkly! But, truthfully, these days I find it easier to read on my Kindle. It's easier to hold, and it's easier to see. Yes, that does make me feel old! Plus, I love the fact that, if I see a book I really want to read, I can simply click a button and it's there on my device—although, that's not so good for my bank account.

Do you plan your stories before you start writing them, or do you just "wing it"?

I'm definitely a planner. I've tried winging it before and stumbled into a dead end every time. I like to know where I'm going. Having said that, once I get going, the characters tend to lead themselves into surprising situations. They honestly are real people to me, and they know what they want. Rose, in A Kiss from a Rose, was the worst offender. She did something that completely took me by surprise. I had no idea! It changed the entire direction of the book. When I start writing a new novel, I know where the story starts, and I know how it's going to end. I have a few key scenes in mind, but I find that sometimes, the characters like to take a detour, and I usually go with that because it's interesting to see where it leads. When the first draft is written, I leave it a while then read it through and see which themes have developed. I then rewrite to make those themes stronger and pull the whole sprawling mess into some sort of order.

Can you tell us anything about any future projects you're working on?

Right now, I'm working on a Christmas novel, which is the second in my Moorland Heroes series—the first being Resisting Mr Rochester, which came out in June. I'm hoping to fit in a Bramblewick Christmas novel, too, for release in October or November. My plans for next year include the second Skimmerdale novel, featuring my absolutely gorgeous and irresistible Aidan Turner-lookalike sheep farmer hero, Eliot. I'm hoping that will be out in spring. Then, fingers crossed, the fourth and final Kearton Bay novel will be out in the autumn, and maybe another one or two Bramblewick novels. I also have plans for the third Moorland Heroes book but I don't know if I can manage it next year. Something's going to have to give!

Both, I think. Friend, because I get to talk to so many other people I would never otherwise know. It's lovely to think that, when you're sitting there all alone in your office, you're only a click away from a chat. Plus, there's no doubt that social media is the best aid to publicising my books. On the other hand, it's the biggest procrastination tool known to mankind. I can sit down, determined to write, and say to myself, "I'll just check out Facebook first". Three hours later, I still haven't added a word to my work-in-progress! That's not good. I'm really trying to limit social media time, but it's not easy.

You're having a dinner party. Which 4 people, living or dead, would you invite?

Honestly, if I could invite people who had died I wouldn't be able to limit myself to four! I would love to meet all my ancestors. I've been researching them for years, and I have so many questions. But, if I had to limit them to four, I'd invite my dad and his parents, and my mum's mum, because I really miss them, and I have so much to tell them and so much I wish I'd asked them when I had the chance. If you want me to name "famous" people, I'd probably go for Enid Blyton, Charlotte Brontë, William Shakespeare and Aidan Turner. Enid was probably my best friend when I was a little girl, and if anyone inspired my love of reading it was her. I'll always be grateful to her for that. Charlotte wrote my favourite book, Jane Eyre, and I'd cherish the opportunity to ask her all about her siblings and life. As for Will Shakespeare, there are so many rumours about him. I'd love to talk to him about them and get to know the real William Shakespeare. And Aidan Turner…Well, er, he's Aidan Turner, people! No other reason needed. If I could pick fictional characters, I'd invite Doctor Who's Eleventh Doctor, Jamie Fraser from Outlander, Jane Eyre and Adrian Mole. What a dinner party that would be!

Stella. I don't know how I missed that first time around, but I decided to give it a try a few weeks ago and was completely hooked. On Netflix, I was persuaded to give Once Upon a Time a try, as my kids kept going on and on about it. I ended up watching the entire six series in a matter of weeks. I absolutely love Rumpelstiltskin, Regina and Hook, and the Charmings are so sweet. Before that it was The Crown—which was excellent—Game of Thrones, the entire first series of Outlander, and every single episode of Being Human. Right now, I'm working my way through old Doctor Whos again, and then I may try Grimm. I rarely watch "normal" TV these days. I've got quite used to being able to watch six series of something, as and when I choose. Having to wait a week for the next episode is so yesterday, darling! 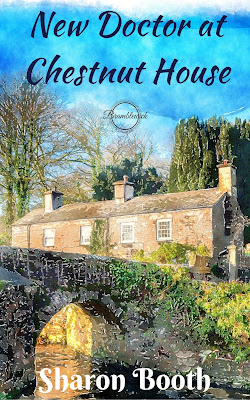 Fabrian Books' Feel-Good novels are heartwarming romantic stories that leave you believing a happy-ever-after does exist.

Is home a place—or a person?

Anna's about to leave Bramblewick behind. She's due to marry her childhood sweetheart in a few weeks, and then she'll be heading to Kent and a whole new life.
Connor's a new arrival in Bramblewick. He's bringing with him a whole lot of baggage, and he's doubtful that this small village on the Yorkshire Moors is the ideal place for him and his daughter, Gracie.

It's not easy for Anna, watching Connor move into her family home and take over from her beloved father at the local surgery, but she's determined to help him settle in and adjust to rural life, so that the villagers get the doctor they deserve.

Connor's not convinced. This country practice is very different to what he's used to, and the locals have some strange expectations of their GP. Protective of Gracie and hiding behind self-constructed barriers, Connor struggles to adapt to life in Bramblewick. Can Anna convince him that this is the place where he and Gracie can finally find happiness?
And can she convince herself that leaving Bramblewick is the right move for her?

Sharon wrote her first book when she was still at primary school. It was about a boarding school that specialised in ballet, and, given that she'd never been to boarding school and hadn't a clue about ballet, it's probably a good thing that no copy of this masterpiece survives. She is the author of seven novels, and has also written for The People's Friend. Sharon lives in East Yorkshire, with her husband and their dog. She is one tenth of The Write Romantics, and a member of the Romantic Novelists' Association. She has a love/hate relationship with chocolate, is a devoted Whovian, and prone to all-consuming crushes on fictional heroes.