Today sees the release of the movie 'Dunkirk', and to coincide with that, I'm really pleased to have author JJ Toner on my blog to talk about the kind of stories WW2 has inspired, and to tell us all about a World War II fiction promotion...

Announcing a promotion of World War II fiction to coincide with the release of the movie ‘Dunkirk’ on July 21. The promotion will include 50+ eBooks, many at reduced prices, all from up-and-coming WW2 novelists, in addition to a giveaway of paperback editions. To check out the WW2 fiction promotion, 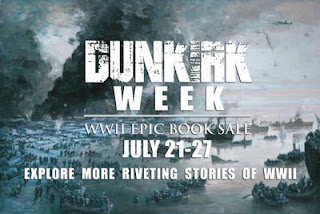 World War II has provided a rich breeding ground for fiction over the years. Pretty much from the end of the conflict, fiction writers have used the War as the background to their novels, with household names like Ken Follett, Jack Higgins, Alistair MacLean, Hans Hellmut Kirst and Hans Fallada leading the way. When I was a boy, I remember reading ‘penny’ comics set during WW2. Who remembers those?

What could be better for ratcheting up tension in a thriller than the cut and thrust of an aerial dogfight, the claustrophobic conditions inside a lumbering bomber or the oven of a tank in the desert of North Africa. What could be more thrilling than running a resistance cell, or an escape line for downed pilots, in Occupied France, under the noses of the Gestapo. Or we have escaping prisoners of war, the German resistance groups, the threat of German super-weapons, daring commando raids, SOE and OSS spying operations, and all set against the backdrop of the Nazis oppression of their own people, the concentration camps, the ghettos, and, of course, the Holocaust.

The period is an ideal setting for a romance, too. Imagine the bittersweet feeling of meeting the partner of your dreams days or hours before they ship out to one of the major theatres of war, or fly on a dangerous mission over enemy territory.
In addition, we have variations on the WW2 theme, like time travel stories that transport people from today back into the maelstrom of the 1940s, and alternative histories of the period. Truly, a rich hunting ground for the novelist.

The ‘miracle’ of Dunkirk, also known as Operation Dynamo, represents one of the most dramatic episodes of the War. Shortly before that, we had Operation Pike (featured in my own book, The Serpent’s Egg) and the Germans’ incursion into Belgium and Holland and the capitulation of France. After Dunkirk we had the Battle of Britain, and many other drama-filled events and incidents, leading up to Operation Barbarossa, the Japanese bombing of Pearl Harbor, and culminating in Operation Overlord, the D-day landings in June 1944, the defeat of the Third Reich and the liberation of the concentration camps.

Take a look at the books on offer in the ‘Dunkirk’ promotion and take your pick. Rarely have so many WW2 authors come together in one place.

JJ Toner writes WW2 and contemporary thrillers, all of which you can check out HERE.
Posted by Michelle Betham at 09:12:00