As I finally head towards the end of the first draft of Extra Time, the second book in the Striker Trilogy, I thought it about time I started to make everyone aware that this next installment is on its way, because I know at least a few of you out there are waiting to find out what happens next in the lives of hot, bad boy footballer Ryan Fisher, handsome and brooding Newcastle Red Star manager Jim Allen, feisty female sports reporter Amber Sullivan, and ex-footballer-turned-TV football pundit Ronnie White. 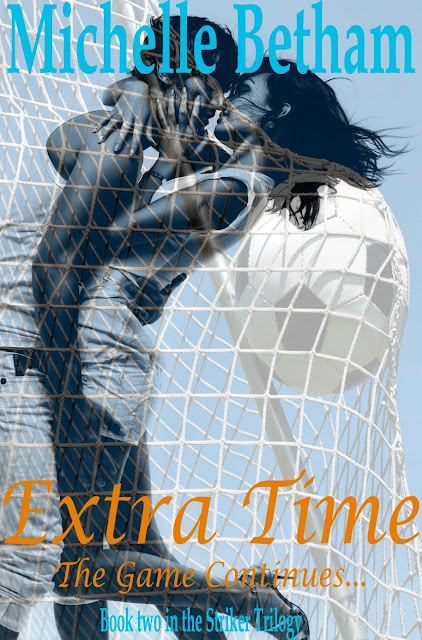 So, for those that are waiting, I've decided to give you all a little sneaky peek at a small excerpt from the book - I've tried to find a piece that doesn't really contain any plot giveaways, and I think I've managed that, but if you haven't already read Striker - the first book in the trilogy - then there may just be an inkling of a *spoiler* in there from that first book.

Anyway, enough rambling. Here you go. A little peek at Extra Time... But please remember, this is very much a first draft, unedited excerpt. There's still a lot of work to do, so please excuse any mistakes/errors/etc. It's not the finished article just yet. ;)

Amber quickly ended the call but wasn’t fast enough to make her escape before Ryan and Gary pushed their way through the double doors she’d been standing beside. She couldn’t really run away now, could she?


She returned the smile. ‘I’ve just been talking to your wife.’


‘She’s at Tanya’s, with the rest of the girls. They went there to watch the match.’


‘You need to give some of those girls a little bit more credit, Gary,’ Amber said, tucking her phone into the back pocket of her jeans. ‘They’re not quite as superficial as you all seem to think they are.’


Gary just let out a derisive snort, said something to Ryan that Amber didn’t catch, and walked away, throwing Amber a wink over his shoulder. She stuck her tongue out at him and grinned.


‘You avoiding me?’ Ryan asked. An afternoon spent sampling the delights of the gorgeous Ellen still hadn’t managed to stop him from hoping he’d bump into Amber after the match. Okay, so he’d spoken to her in a professional capacity over the past few days, in a couple of interviews for TV, but he’d wanted to catch her alone. And right now, as he looked at her, all crazy red hair and piercing pale-blue eyes, every memory those hours with Ellen had managed to erase came flooding back ten-fold.


Amber swung round, her eyes instantly meeting his. ‘No. No, of course I’m not avoiding you.’


‘What do you want me to do, Ryan? Actively seek you out for regular get-togethers?’


He stuck his hands in his pockets, turning away from her for a second. ‘It just feels...’ He looked at her again. ‘I don’t know… It just feels as though, what we had… it feels like it never happened sometimes, that’s all.’


‘Yeah, well, there’s been a lot of water under the bridge since then,’ Amber said quietly. It was hard to forget what she’d once felt for this man, and maybe she didn’t really want to. ‘So much has happened.’


‘Tell me about it,’ Ryan sighed, pushing a hand through his dark hair. He really didn’t want to still be feeling this way, but he couldn’t help it, couldn’t push those feelings down, no matter how hard he tried.


‘Are you… is everything okay, Ryan?’ Despite everything, she’d never stopped caring about him. She couldn’t do that, couldn’t just switch those feelings off, even after all these months.


‘Everything’s fine,’ he replied, his eyes meeting hers again. ‘It would just be nice to talk to you sometimes without it having to be under the guise of a TV interview.’


He just looked at her, and she stared back at him. He was so handsome, so young. So dangerous. She only hoped he’d learned enough lessons to allow him not to let history repeat itself. Again.


‘I’m married now, Ryan. You do understand that, don’t you?’


‘Don’t treat me like a kid, Amber. Yeah, I know you’re married. It’s bloody hard to ignore that fact when all you do is wrap yourself around the boss twenty-four-seven…’ Now he was thinking aloud. Not the best idea.


‘Do you realise how childish you sound?’ She turned to walk away but he grabbed her wrist, swinging her back round.


‘Yeah. You should be.’ She pulled her arm free of his grip, rubbing her wrist. ‘Look, I know things are still a bit weird…’


‘I just want us to be friends, Amber. That’s all. I want us to be able to talk to each other and forget the past, put it behind us.’


She looked into his eyes. Kind eyes. Yeah, he really had changed over these past few months. ‘And you think we can do that, do you?’ she said quietly, suddenly realising that this was the first time she’d really spoken to him – properly spoken to him – in weeks. All that time and the only talking she’d ever done with him had been because she’d had to – because she’d had to interview him. Professional purposes only. Had that been deliberate on her part? All those months and this was the first real conversation she’d had with him. And that thought flooded her with guilt. Because he hadn’t really deserved that.


‘I think we can try,’ he replied, his eyes still fixed firmly on hers.


‘Ryan… I am so sorry. I am so, so sorry. I just…’ She sighed, leaning back against the wall, pushing a hand through her hair. ‘Maybe I just didn’t know how to handle it all. How to handle still being around you. I mean, it’s still so complicated…’


He smiled, and Amber felt her stomach give a small but noticeable jolt. ‘I just want us to be friends. Nothing more, no ulterior motive. I promise.’


‘Yeah, well, you know how I feel about promises.’ She was aware of Jim’s voice somewhere nearby and, despite what Ryan had just told her, she still didn’t want Jim to think Ryan might be playing some kind of game. She wasn’t altogether sure how much Jim trusted Ryan. They’d never really talked about him – about what he and Amber had shared. And maybe that had been a mistake, too. Maybe they should have been more open, about everything. ‘Look, I’ve got to go, Ryan. I’ll see you later, okay?’


She turned round to look at him.


If he said that out loud enough times then he might actually start to believe he meant it because, right now, he wasn’t altogether sure that he did. Of course he wanted her to be happy – after what he’d put her through it was the least she deserved. But it still hurt to think that, had it not been for his sheer stupidity, they could have been happy together. They’d come so close, so fucking close.


‘Why did you do it?’ Ryan whispered to himself as he watched her walk down the corridor, over to her husband. He watched as his boss smiled at her, kissing her quickly, sliding an arm around her waist as they talked, both of them totally unashamed of showing how much in love they were. ‘Why?’


But Ryan knew the answer to that. And as much as he would have liked to turn the clock back and rewrite history, he couldn’t. He just had to get on with his life, the way she was getting on with hers, and he would. He’d start doing just that.


Making his way down the corridor to join the rest of the team as they celebrated their win over CD Adeje, one of Spain’s biggest clubs, he recalled a short and totally unexpected conversation he’d had just before the game. A conversation he’d thought nothing of, in fact, he’d just laughed it off as something flattering but highly unlikely to ever happen. However, seeing Amber just now, it was making him think again. Maybe it wasn’t such a stupid idea after all. Maybe it was exactly what he needed. Maybe he shouldn’t dismiss it out of hand altogether.


Decision made. He just hoped it was the right one.

Striker - the first book in this "Fifty Shades of Football" trilogy (oh yes - it's got quite a few steamy moments, and I'm not just talking heat from the post-match showers...) is available to download HERE from Amazon, and HERE from Kobo.

Final Score - the last book in the Striker Trilogy - will follow in 2014.