Yes, after a bit of an absence while I prepared Striker for publication, 'Meet the Author' is back! And today I'm pleased to introduce fellow author and North East resident, Gemma Wilford!

Want to find out more about her? Take it away, Gemma! 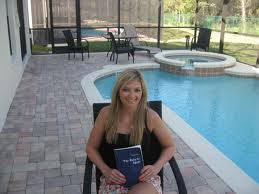 Thanks to Michelle for having me here today, I am honoured to be featured on her blog and I have been following her exciting journey these past few months as she has produced her brand new little beauty Striker.

Like Michelle's books, I have always loved a good romance story. I also love adventure stories; early favourites include The Famous Five, The Secret Seven and Nancy Drew. I spent my summers engrossed in these books and when I did come up for air, I would immediatley start writing my own version.

I loved my English Lessons in Middle School and the teacher that helped nurture my writing back then has recently published his first novel Beyond Saving. It was during my time at this school that I was a member of BBC Newsround's Press Packers and I was twice runner up in their journalistic competitions, attending their studios to film in the Blue Peter Garden a news piece to camera.

Adolescence then the hum drum of working adult life soon crept in the way of any creative writing. It was the back end of 2010 when I started writing again and wrote a children's book The Ruby of Egypt ,which became my first self published book in 2011. It has since been revamped; fully revised and edited with a brand new cover and the second edition is now available.

Last year, I had a short story 'Breaking The Rules' published in the I Am Woman Campaign Anthology Volume Two as well as spooky story 'Lady In Black' featured on GK Adams blog as part of a Halloween theme. I am currently in the editing stages of my first novel, a hunourous Chick-Lit recession based book 'Miss Pooshoe', which I hope to release Autumn 2013

Thank you Michelle for having me here!


Gemma Wilford was born in Nottingham, England and grew up in Cramlington, Northumberland, where she still resides with her husband. Her journalistic achievements include being twice runner up in BBC Newsround's Press Pack competitions.


2011 saw Gemma self-publish her first Children's Book 'The Ruby of Egypt' and she is currently in the editing stages of her first novel, a humourous Chick-Lit recession based book 'Miss Pooshoe'. She recently had a short story 'Breaking The Rules' published in the I Am Woman Campaign Anthology Volume Two as well as spooky story 'Lady In Black' featured on GK Adams blog. Gemma documents her publication journey as an author to her blog 'Missuswolf's StoryLand’.

~Buy your copy of The Ruby of Egypt here:~ 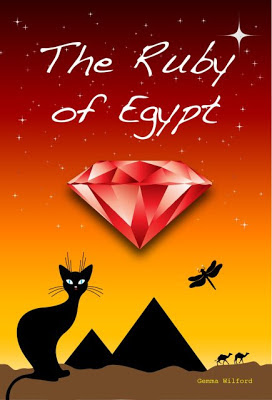 Ruby finds herself being dragged by her over excited and rather embarrassing parents on a sight-seeing holiday to Egypt. Viewing the pyramids is the last thing a fourteen year old girl wants to be doing when she could be basking in the glorious sunshine by the pool instead. Her disappointment soon turns to delight when she curiously follows a black cat inside the Great Pyramid of Giza, where upon entering she is mysteriously transported back in time to Ancient Egypt. Aided by a talking feline.Guided by a dragonfly. Protected by a Falcon headed God. Ruby must embrace an important mission that will not only challenge her ability to amend her stroppy attitude, but will change the purpose of her life forever.


Ruby could feel the walls closing in on her but she couldn’t move; the transmission between her brain and her feet lost in translation. Oh God, she thought, the Pyramid’s collapsing and I’m going to get trapped in here! Panic set in, her breaths becoming shorter, making her gulp for air. There was a gust of wind that sent sand whispering all around, choking her as it invaded her lungs. The light grew brighter as she struggled to maintain her balance against the continuous shaking, blindly grasping with one hand for something to hold onto whilst keeping the other protectively over her eyes.


The roaring noise grew louder and louder, vibrating dangerously in her ears. She wanted to curl her arms around her head before her ear drums burst against the pressure. A wave of dizziness splashed over her as the room started to spin in an uncontrollable whirlpool.

The last thought that floated around her mind as her consciousness faded was how annoyed her parents were going to be.

Thank you so much for a brilliant post, Gemma, and for appearing as a featured author on my blog. It was a pleasure to have you here!

I wish you every success with The Ruby of Egypt, and with all your future writing projects.

Email ThisBlogThis!Share to TwitterShare to FacebookShare to Pinterest
Labels: Gemma Wilford, Meet the Author, The Ruby of Egypt