Last week I did a guest post on my fabulous Twitter/blogger friend Jamie T Dougan's blog It's My Life! And today, Jamie has kindly agreed to do a guest post for me, and it would seem that, right now, both he and I are on the same wavelength when it comes to our writing. Both of us are currently immersing ourselves in the world of football, but you've heard enough about what inspired me to write Striker - let's find out what's inspired another author to write about the beautiful game... I'll let Jamie tell you more...

When I told my wife that my first novel, Offside! is going to be about a fictional footballer, her response was ‘Again?’
That’s because my first published short story, Grande Plage, is about a young footballer falling in love while on loan to a team in France. That story though was more of the old romantic in me and being a big softy at heart who loves a happy ending.

There have been other short stories I’ve started and never finished that have been set in the world of football too and that’s because being a football fan, having played the beautiful game and to a degree, having worked within the world of football, it’s an easy subject for me to write something about.  That’s not where my inspiration comes from though. It comes from 2 sources… a cartoon strip in The Sun newspaper and a TV drama from a few years ago. 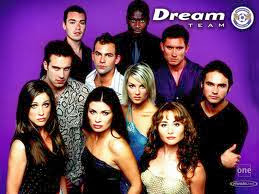 That TV drama was Dream Team,the story of a fictional football team called Harchester United and its players and staff. It ran for 10 seasons on Sky 1 and launched the careers of a few familiar faces… Alison King (Coronation Street), Rob Kazinsky (Eastenders) and Ricky Whittle (Hollyoaks). I only watched 9 seasons though because by season 9, the story lines were getting ridiculously far-fetched. Mis-fortune and bad luck followed Harchester United like a bad smell.

Twice, Striker disappeared from The Sun. The first time though, it was replaced by a similar cartoon strip called The Premier. But when Striker suddenly without warning, vanished from The Sun in August 2009, I was gutted. It finished with an incomplete story line. You can only imagine how delighted I was when Striker returned to The Sun at the start of this year. My inspiration was back… and just at a time when I needed it. It was like a kick in the butt reminder of what I was trying to write a story about… my own fictional footballer called Shane Henderson and his journey from teenager to almost present day.

Michelle wrote a post for my blog recently about where we get our inspiration. And like Michelle, I have visual inspiration from actors/actresses in my favourite TV shows. I’m inspired by people in my life and events from my life. But the biggest inspiration for me in the story I’m writing at the moment is the fictional tales in a cartoon strip.

And check out his blog HERE.


And look out for a 'Meet the Author' post with Jamie very soon, where I'm sure we'll find out more about him, and his writing. Watch this space...