My All-Time Favourite Christmas Songs... What are yours...? 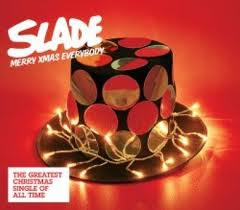 It's another musical-themed post today to celebrate the release of my new novella Christmas Without Icing, but whilst today's earlier post was all about the festive soundtrack for the book, this post is going to look at some of my all-time favourite Christmas songs.  Just to make us all feel even more festive.  And for the younger ones amongst you, a Christmas song was a record with a Christmas theme that bands and artists used to release back in the olden days before Simon Cowell created 'The X Factor' and subsequently ruined Christmas forever. ;-)

I've got many happy memories of Christmas, and a lot of those memories revolve around songs, and, let's face it, there have been some classics turned out over the decades.  It's just a shame they don't do them anymore, but, let's relive some of those memories by taking a look at some of my favourites from years gone by...

Now, come on.  Who doesn't like this Christmas classic?  It's the ultimate Christmas song for me, probably because it's always been around, right from when I was just five years old in 1973, when it was released, right up to present day.  It never goes away, and so it shouldn't.  You only have to hear this and you just know it's Christmas!  A true classic that will never die.

Wizzard - I Wish It Could Be Christmas Every Day


I just love the 70s!  And although I don't for one second share this song's sentiments - I think I'd quite easily go barmy if it was Christmas every day, although I doubt I felt the same way back in 1973 - this is another of those songs that brings back so many happy childhood memories of Christmas.  I can still remember one Christmas Eve decades ago, when me, my mum and my sister (dad was down the pub escaping for half an hour!) were all snuggled on the sofa watching Top of the Pops and this song was on, and me and my sister were so excited!  We wanted to go to bed and go to sleep because then it would be Christmas Day, but we were way too excited to settle down!  So many happy memories, and these songs always make me smile when I remember them.  This is another true classic Christmas song that will live forever.


I really like this song from the Christmas of 1980, but my husband hates it!  He has to leave the room if its on, which I find quite amusing because I have no idea what he's got against it.  It's another of those classics that's always around at this time of year, and I don't mind that one bit.  Another of my favourites, definitely!

Now, usually I'd run a mile from anything Chris de Burgh - that 'Lady in Red' does my head in, big time!  But this - this is good!  I like this!  God knows what he's actually singing about but I don't really care - it makes me feel Christmassy (is that an actual word??) and that's all I'm bothered about. And, like many on this list, it's a Christmas song from the 70s, released in 1975.  A great time to be a kid, the 70s...

I'm sorry, but the Godfather of Christmas songs had to make an appearance.  And this particular track has made it onto my list of favourite Christmas songs because, once again, it brings back happy memories of a great Christmas, although I was very much an adult back in 1990, when this was released.  And anyway, I'm not ashamed to admit I'm a bit of a closet-Cliff fan.  'Devil Woman' was a classic, I don't care what anyone says...

Michael Buble - It's Beginning To Look A Lot Like Christmas

Because you've just got to have a bit of Buble at Christmas!  Enough said...

Released in 1974, this song also appeared on my Christmas Without Icing soundtrack, but because it's one of my ultimate favourite Christmas songs, it's making a second appearance today.  Because I love it!  It's one of those songs that makes me feel all warm and cosy inside whenever I hear it, and like many of the others in this list, it just brings back a lot of happy, childhood memories. And I just adore the ending to this song!

The most recent (that I can remember, anyway) and probably one of the last Christmas songs to be released as far as I'm concerned, in the Christmas of 2003.  I love The Darkness, and I loved this song. It's just so tongue-in-cheek - a bit like The Darkness themselves, really...

Another classic 70s Christmas tune, released in 1973, proving that the 70s certainly was a good decade for the Christmas song.  But, like many of the others from that time, this track also lives on, year after year.  A happy, feel-good Christmas song.


So, there you have it.  Just a few of my all-time favourite Christmas classics, and there are still a load more I could've mentioned, like 'Fairytale of New York' by The Pogues feat. Kirsty MacColl, or 'Happy Xmas (War is Over)' by John Lennon and Yoko Ono, Wham!'s 'Last Christmas' and, of course, 'Do They Know It's Christmas' by Band Aid (original 80s version, that is).  They're all classics, and I love them all.  And, like I said before, it's just a shame that we don't have a glut of Christmas songs to look forward to at this time of year anymore.  But at least we'll always have these classics to keep the musical spirit of Christmas alive, and to help relive all those fabulous Christmases of the past...  Long live the Christmas single!

And, don't forget, my brand-new Christmas novella, Christmas Without Icing, is available to download HERE from Amazon for just 99p!