X Factor Monday, and a couple of bonus movie reviews.

OK.  Last Saturday's 'X Factor'.  Where do I start?  Alright.  We'll start at the beginning.  That first bloke from Essex, the one with the blond hair and fake tan; just one word - why???  Was I listening to a completely different programme or something?  I mean, I know I've got a slightly blocked left ear but I'm absolutely positive it hasn't turned me tone deaf.  He couldn't sing!  Oh, sorry, I almost forgot - he's the "entertainment value" contestant, isn't he?  Potential fodder to be cut before Boot Camp even begins, or maybe not... After all, there's usually a novelty contestant thrown into the mix somewhere along the way, isn't there?  Although, I have actually heard rumours that we won't be seeing many of those this year.  Hmm... we'll see...

Anyway, back to last Saturday's programme... What the hell was going on with those auditions in Newcastle????  Mind you, I shouldn't have been surprised that they'd decided to make the north east look as if it was a "talent free zone", as Nicole Scherzinger so nicely put it.  How dare she!  We gave the world Cheryl Cole... OK.  That's not  a great example of the talent the north east can turn out, but Ant and Dec are always good value!!

My mother was actually so disgusted at 'X Factor's' portrayal of us here in the north east that she's refusing to watch it anymore, whereas me and my hubby actually found it hilarious!  Because we know that we aren't all weirdo's and attention seekers with a worrying delusional streak that makes some people think they sound like Whitney Houston.  We just provided a large slice of the entertainment on Saturday night, that was all.  I'm sure some pretty decent singers turned up to Newcastle Arena for those auditions, but they don't make as good telly as some bloke with a carrier bag containing his packed lunch who absolutely murdered Journey's 'Don't Stop Believing' (understatement of the year - I still think he only turned up for a bet, at least, that's what I'm hoping), and some girl who, really, should not have been allowed anywhere near those auditions.  Not only was her outfit questionable, but her voice... it was making me ears bleed!  What was her mother thinking?  Hadn't she heard her daughter sing before?  Did she honestly think that sound was a pleasant one?  She got four no's - unsurprisingly.  All I can say is, thank the Lord for the young lad at the end of the show who actually managed to make a Tulisa song listenable.  And proved that we north easterners do have talent! ;-) 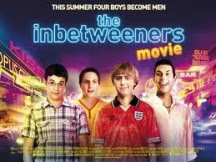 Right, so, that was the early part of Saturday night sorted.  What did we do once 'X Factor' had finished then?  We watched 'The Inbetweeners Movie', that's what.  And what did I think of it?  Well, not much of a plot to speak of, but I wasn't exactly expecting anything brain-taxing.  However, after speed-watching all three series of 'The Inbetweeners' over the past couple of weeks I was really looking forward to seeing this movie - and it didn't disappoint.  It was very childish, very silly, extremely crude, and bloody hilarious!  Not sure what that says about my sense of humour but I loved it!  Got quite a soft spot for those four characters now.  I mean, in all honesty, the film is nothing but an extended version of the TV shows as Jay, Simon, Will and Neil take their first lads' holiday abroad, getting up to everything that I suspect goes on on a lads' holiday abroad (not having been on one meself, I'm only guessing, but I reckon this film just about summed it up!), but for fans of the show, I reckon they got it just right.  Definitely not for everyone, but I thought it was a great way to while away an hour and a half on a Saturday night.  And, I have to say, I'm really crossing my fingers that those four characters make a reappearance some time in the future.  I'm actually missing them...

And last night, due to there being absolutely nothing on TV, apart from the Hairy Bikers' Mississippi Adventure on the Good Food Channel but I've SKY +'d that, and that rather good drama on ITV, 'The Last Weekend' (wish they'd put all 3 episodes on one after the other though - dying to know what happens and haven't really got the patience to wait another week!) we decided to watch another film.  But we decided to go for a completely different genre this time - horror.  Well, a horror movie with a difference, to be honest.  Because 'The Cabin in the Woods' isn't really an ordinary horror film.  It starts off with scenes that, at first, make you wonder if you're actually watching the right movie, then when it finally gets going it looks as though it's going to follow the same formula that all these kinds of movies follows - five friends head off in their RV to a remote cabin by a creepy lake for a weekend of... well, let's put it this way, it wasn't the weekend they were expecting, and this certainly wasn't the kind of film I was expecting.  It was much better than that!  I'd read, while doing a little bit of research into this film, that the less you know about the movie the more you'll enjoy it, and that was certainly true in my opinion.  I'd decided not to read any reviews about it for fear of spoilers, because I'd heard there was more than a twist to this film, and I'm glad I made that decision.  Knowing too much about what's going to happen will ruin it, I promise you.  All I can say is that you may think you know where this movie is heading, but you don't.  Not unless you're my hubby who insists on trying to guess the ending of everything and, although he actually did almost sort-of predict the ending to this, it's the kind of movie that makes that kind of thing a whole lot harder to predict.  He didn't enjoy it half as much as I did - he actually said that he thought it was poor, considering the hype it received when it was first released - but I absolutely loved it!  Yes, it's a little bit overloaded with blood and gore at some points, and at times it's hard to believe what you're actually looking at, but at the same time you can't tear your eyes away as you frantically try to work out just where the hell this is all going.  And where it ended up was certainly a surprise to me.
If you like films such as the 'Final Destination' series (which I'm a huge fan of) then you might just like 'The Cabin in the Woods' - a movie which has seemingly turned that genre right on its head.

OK.  That's me done here for today I think.  Time to get back to the 'Only Fools and Horses' weekend on GOLD and maybe do a little bit of reading.  It's a typically rainy Bank Holiday Monday so a cup of tea wouldn't go amiss either... oh, and seeing as tonight's TV appears  to be just as dismal as the past couple of evenings, it looks as though we'll be watching another movie.  So, what do we fancy this time...?

Email ThisBlogThis!Share to TwitterShare to FacebookShare to Pinterest
Labels: movie reviews, North East of England, The Cabin in the Woods., The Inbetweeners Movie, The X Factor