Bon Voyage! We have a cover... 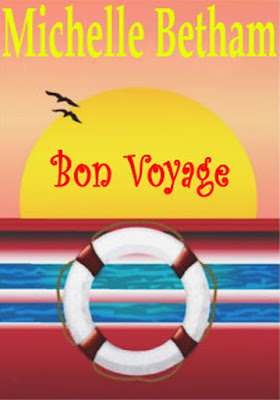 So, here it is.  What do you think?  Thanks to the help of my ever-wonderful husband, my soon-to-be-released new comedy romance, Bon Voyage, now has a cover!  There I was, quietly watching 'Holby City', wondering if Michael Spence was ever gonna shave that beard off (although, I have to say, I actually think he looks better with it) whilst my lovely husband - without even telling me he was doing so - was working away on my book cover.  Thankfully, I'd been made aware of its existence and had a brief chat about fonts and what have you before 'The Syndicate' started, because I do like my Tuesday night BBC1 dramas!  Well, we all need that little bit of down-time and some escapism of our own, don't we? ;-)

Anyway, in just a few week's time, Bon Voyage will be ready to launch, and yes, I'm going to use as many nautical/maritime terms as I possibly can with regards to marketing this cruise-themed novel! ;-)  Let's put it this way, if we're talking about the book launch in terms of, say, getting ready for a holiday, I'm at what I'd call the "packing" stage - I know what I want to take with me, I've just got to make sure it all fits into the suitcase!  I'll translate that, actually, because I'm not even sure it makes sense!  What I mean is, the book is written, I've read through it a couple of times now, the story is there, there aren't that many changes to be made, and it really shouldn't be too long before it finally sets sail, out into the big wide world.  Okay.  I'm just talking rubbish now.  This trying to think of nautical/maritime references isn't quite as easy as I first thought!

But, like I said, it's almost ready.  Almost.  But not quite.  Yeah, I've learnt lessons, and this book isn't going out until I'm as sure as I can be that it's ready.  It isn't a great work of literature, and it isn't going to change the world, but it might - it just might - make some good summer reading, whether you're lying on a sunlounger or not!

It's got sunshine, it's got beautiful ports of call from Corsica to Casablanca; it's got two thirty-something women on the cruise of a lifetime, it's got a romance writer, a bloke who looks like he's walked straight off the set of Fantasy Island - and it's got a boy band.  Oh, and a good dose of romance.  Of course!  Bon Voyage -ready to launch May 2012!

Right, I'd better get back to the editing then, hadn't I...?

Want to check out a little taster of Bon Voyage? You can read the first few pages here... Bon Voyage - a small excerpt.

Oh, and if you're looking for a bit of a summer read right now, something to transport you off to sunnier climes and give you a bit of a giggle, why not check out my Tenerife-based comedy romance, Too Much Trouble in Paradise?  Just a thought... ;-)