It's Friday, and I'm in a good mood after a great week of writing, so I thought I'd do a bit of a wind-down post today and make it a music-inspired one.  Because I've doing a lot of listening to music this week, I always do when I'm writing.  Music is a great source of inspiration for me, I can get a whole novel's worth of ideas just from one song sometimes so it's a very important part of my life.  And this week I've been listening to a lot of music from a decade that threw up some incredible and diverse tracks - a decade that holds a lot of very happy memories for me: The 1990's. 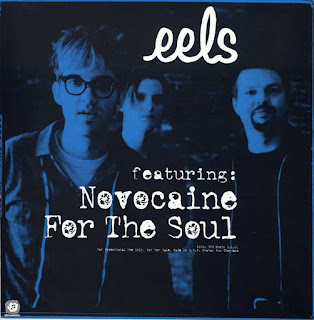 EELS - Novocaine for the Soul.  This track just epitomises all that was great about music back in that decade - in my opinion, of course.  But I just love everything about this song, it's got an almost eerie, atmospheric feel about it.  Even the video's great!  And I love Mark Oliver Everett's voice.


Shawn Mullins - Lullaby.  This is my kind of music.  And I just adore the chorus!


The Verve - Lucky Man.  A track from one of the best albums of the 1990's, Urban Hymns.  In fact, it's probably my favourite track from that album, and again, I love Richard Ashcroft's voice.  Never tire of listening to this.


REM - What's The Frequency, Kenneth?  Haven't got a bloody clue what the hell Michael Stipe's going on about here, but I just love this song!  It reminds me of my days on the Performing Arts course at college because it was released just as I was about to start that course, and it also reminds me of when my mum and dad got our first satelitte dish installed - I remember sitting on the couch watching this video on MTV and thinking, "Yes! Non-stop music videos have arrived!"


Pink Floyd - High Hopes.  Don't even get me started on how much I love this song!  Pink Floyd are one of my all-time favourite bands, without question, and The Division Bell is one of my all-time favourite albums, with this being the stand-out track for me.  Pink Floyd do atmospheric like nobody else, they give me the chance to switch off, kick back and enjoy everything that is great about music.  This album also reminds me of seeing the band live at Earls Court - an amazing night!  Incredible stuff.


Live - I Alone.  I love the way this track builds up to a cracking chorus!  And I think everyone knows by now how much I love the slightly heavier side of music!!


Foo Fighters - Learn To Fly.  Just squeezed into the 90's this one, released 1999, but no 90's line-up would really be complete without this track.  And the video (featuring Jack Black) is hilarious!  Dave Grohl is a legend!


Pearl Jam - Jeremy.  I was very much into my Grunge back in the 90's - Nirvana, Pearl Jam, Soundgarden... I had the checked shirt tied round my waist and the heavy boots and the long hair.  I was never really a girly-girl, but I think I may have already have mentioned that.  Love Eddie Vedder's voice, this was an epic song, music just seemed to have more of an impact back then, and it proved that we had some great bands and great music come out of the 1990's. I still find the ending of this video quite disturbing though...


Degrees Of Motion - Shine On.  Bit of a curve-ball this one, but I didn't spend the entire 90's listening to grunge/indie/rock.  No, the (early) 90's was a time when I was out every weekend, and I loved a bit of dance music too because, in my opinion, the late 80's/early90's was the best time for dance music and that's probably me showing my age, but I don't really care.  There were some fabulous dance tracks released around the early 90's and so many of them bring back some great memories of Friday and Saturday nights down Whitley Bay, the days when you could go out with a fiver and still come home with change...


Felix - Don't You Want Me.  Ending with a classic dance track too, a song that had an infinite amount of remixes, but this was the version that I loved, and the one that I remember being played most Friday and Saturday nights.  Love it.  Still do.  Ah, how much did I love the early 90's...?

And those 10 tracks really are just the tip of the iceberg as far as my favourite songs from the 90's are concerned.  I could, quite frankly, do a list that topped over 100, so these are nothing but a taster, really.
And they're all songs I still listen to now, all songs that are on my iPod and will stay there.  And yes, I guess I've reached that age where I take very little or no interest at all as far as new music today is concerned because there isn't much that actually makes me sit up and take notice.  My hubby accuses me of living in the past, but I disagree.  I just like to listen to music that means something to me; music that I enjoy.  And if that makes me sound old then so be it.  I can live with that.

Somebody said on the TV this morning that there really are only two types of music in this world - good, and bad.  And you can't really argue with that, can you?