This week in my 'Meet The Author' post I've been talking to new author Lacey Dearie, who's debut novel The Tangled Web has just been released on Amazon.

Lacey is an indie author from Ayrshire in Scotland.  In her other lives she has been a book-keeper, a secretary, a paralegal, a mystery shopper, a blogger, a failed actress, a sex toy tester and a freelance writer.  Her first paid writing job was an article about Friday the 13th for respected British magazine, The Lady (using her real name) and she hopes to begin writing factual articles again in the future.

The Tangled Web is her first novel and has taken over three years to complete.  Now that the project is finished she hopes to spend more time with her son, start an Open University degree course and catch up with the housework (oh the glamour of being an indie author!)
Lacey loves to hear from her readers and can be contacted on laceydearieauthor@gmail.com or on Twitter as @laceydearie.


So, let's find out a little bit more about Lacey, and her work...

Can you tell us a little bit about yourself and what it was that made you decide to sit down and write this book?
I've always wanted to be a writer, since I was able to write in fact!  When other children were spending pocket money on sweets or comics I was buying Care Bear stationery, turning my kitchen cafe into a desk and asking for a typewriter for Christmas.  As I grew up I decided I wanted to do something a little more "realistic" until I attended a Travis concert in 2002 where a drunk and emotional Fran Healy urged the audience to "follow your f*****g dreams."  Not long after that I was involved in a minor car accident and I realised that if it had been worse, and anything bad had happened to me, I would have died as a book-keeper, having never attempted a writing career.  That horrified me.


Tell us a little bit about the book.

This book was inspired by various experiences I had in my life, with old friends, old boyfriends, and people I met online.  It was a nice way to come to terms with some things, and cheaper and more fun than a visit to a psychiatrist. 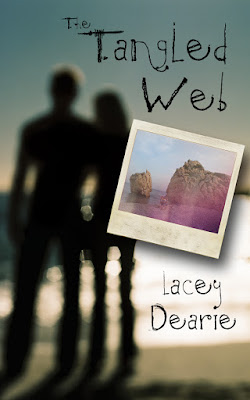 The book is centred around two women, Vicky and Flic, and what happens to them when they think they'll follow their own dreams and try to be private investigators.  They carry out the business online, using social networking, and the story is about how even though they try to keep everything in a nice neat little virtual world, it always spills over into their real lives, usually with disastrous consequences.

What inspires you most when writing?

The people in my life and life in general.  I never feel inspired if I'm just sitting at home watching TV.  I always feel inspired when I'm travelling and I'd love to write more stories set in foreign countries - maybe short stories next.  The book was originally set half in Devon and half in Portugal but it all changed and relocated to Inverness and Cyprus because of my fondness for those places.

How do you go about creating characters for your books?

I usually start with some personality traits of two or three people I know and mix them together and exaggerate them - really make them larger than life!  Over the couse of the story, I let them evolve some more and by the time I was finished with all the characters in The Tangled Web, they were unrecognisable from the original ideas I had for them.  I've grown to love them all though.  Even the baddies.  Especially the baddies!

Do you have any method to your wrting, for example, do you work from an outline, or do you just sit down and write and see where the story takes you?
Yes, I work from an outline.  I always write my synopsis first and gradually build on it.  It took me two weeks of writing all day every day to write the final synopsis for The Tangled Web.  I tried just sitting down to write to see where the story took me, but it was a complete mess.  It's not for me!

What kind of books do you yourself like reading?

What do you like to spend time doing when you're not writing?
I'd say spending time with my son and husband, going for walks and experimenting with vegan baking.  Now that I've finished The Tangled Web I'm going to start training for a 10K next year to raise money for The Anaphylaxis Campaign and also start an Open University degree in the autumn.  Well, that's the plan.  Who knows, maybe I'll be inspired to write another novel instead!

What plans have you got for marketing your new book?

Lots of tweeting, lots of blogging and sending out reminders to buy the book with my Christmas cards this year.  I'll see how it does in the first couple of months and then work out another plan of action.  Any tips on marketing from fellow indie authors would be much appreciated.....hint, hint.

What are you working on next?  Do you have plans to write another book?

I have no plans for another novel at the moment, but I'd definitely like to write another at some point in the future.  Perhaps for Nanowrimo next year....who knows.  I'd like to start blogging more often, so that will be my creative outlet for the foreseeable future!

Lacey, it was great talking to you!  Thank you so much for taking the time out to answer my questions, and I wish you every success with The Tangled Web.

Don't forget, you can contact Lacey via Twitter or email, and check out her blog Lacey Dearie's Tangled Web

Her debut novel, The Tangled Web, can be found on both Amazon.co.uk and Amazon.com